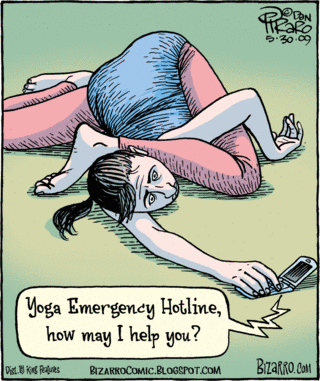 I’m injured right now, which is only fair. I’ve written about injury often enough in an abstract sense, so now it’s my turn to experience the very literal effects that being hurt have on my practice. It’s my turn to learn about injury, equanimity, and compassion.

My practice has been compromised since the end of October. Around that time, I had been catching my ankles with assistance and had just learned Kapotasana. All seemed well, but then I felt low back pain, something that troubles 31 million Americans. Now I’m one of them.

I never had a moment during those deep backbends that made me think something’s not right. The day I learned Kapo, I walked around for the rest of the day with an achy low back, but it didn’t seem abnormal. Over the next few days, however, I was in trouble. I could barely get through standing series. Every time my pelvis shifted position, I felt stabbing pain. Getting into a forward fold took at least five breaths.

I took my teacher’s advice and took it easy. I iced and even took anti-inflammatories. I went to the chiropractor (five times). I saw a massage therapist. I did supplementary stretching, hot-and-cold therapy, and castor oil packs. I carefully worked into those deep backbends, only doing them if I could accomplish them without pain. Over a period of eight weeks, I seemed to be getting better. I had good days and bad days, but the general trajectory was trending towards improvement.

Then something went wrong. While I was on vacation, my back suddenly got worse. Much worse. I felt great during practice and immediately after, but my back would spasm randomly throughout the day, hard enough to make me drop what I was doing and clutch onto the nearest solid object for support. I could do Kapotasana, but reaching over to pat the dog left me wide-eyed and gasping.

I don’t know if it was all the walking in the snow, a few slips on the ice, or the stress of cross-country travel that brought me to my knees, literally and figuratively. Ultimately, it doesn’t matter. Something is not functioning correctly in my body and I need help. Part of my practice last week included making an appointment with a sports medicine doctor. I had to surrender.

But these are merely fears. I don’t know what will happen in my appointment tomorrow. The doctor I’m seeing is used to treating endurance athletes. He’s a runner himself. He gets the need for daily movement. At least I hope so.

Do I blame the Ashtanga system for my injury? Nope. Do I blame Taylor for giving me Kapotasana that day? Hell no. Do I blame myself for being careless or pushing too hard? Absolutely not. Injuries happen. There’s no blame involved. Blame means assigning responsibility for a wrong or fault. No wrongdoing happened here. No one hit me in the low back with a sledgehammer.

Injury can happen when you’re physically active, and even though Ashtanga is a spiritual system, it involves a lot of physical activity. I accept that. I’m scared of the long-term consequences of my current condition, and have irrational thoughts that I’ll never be able to drop back again, or that I’ll be stuck on Kapotasana forever, but I recognize those thoughts as irrational. It took me two-and-a-half years to be able to bind Supta Kurmasana. That’s okay.

Being unable to do a pose due to injury doesn’t make me a lesser practitioner. You know what does? Thinking that a pose defines my practice.

For better or worse, this current injury is part of my life. It’s part of my practice. Healing will take time and may not be physically or emotionally comfortable, but discomfort brings growth. As Maia said, “Yoga’s not about following a path of feeling good.”

The shapes I can make with my body mean little. It’s not the asanas that matter. It’s how I approach them, and most importantly, what I do with my day after I’m done with them.

12 thoughts on “On Injury and Practice”