Well, I’m back to my original stance. I’m not ready to be a teacher.

I tried. Really, I tried. At first, I thought I’d teach mostly Vinyasa because I lacked the experience to teach Ashtanga. I made playlists (that no one liked) and sequences (that looked like the Primary Series). I taught Hot Yoga, Yoga for Runners, Yoga for Athletes, and Yoga for Writers. I made more playlists (that were boring but non offensive). I added more classes. I even tried a misguided attempt to hold a Mysore class at a new studio, but it was only on the schedule once a week, so it didn’t really work.

At the height of it all, I was teaching ten classes a week, on top of teaching a freshman writing course as a graduate assistant and finishing my thesis, which happened to be a book. That’s right. A book. Don’t worry, though. It won’t get published.

I was overstretched, and it wasn’t from too much Paschimottanasana.

I had only been teaching for a couple of months, but I was already getting that, “Gee, I hope no one shows up today” syndrome. I felt like a fraud teaching Vinyasa classes. I didn’t do enough Vinyasa to be able to pass on that style of yoga, and I had a rude awakening when trying to teach Ashtanga but pass it off as Vinyasa.

A Vinyasa teacher came to one of my hot yoga classes to audition me for another studio, and after the class, she told me point-blank, “You can’t call that a flow.” She was right. I had no business trying to teach one thing and call it another. For the next few months, I went to Vinyasa classes regularly and played with sequencing and transitions for my own classes, but it never felt right.

I didn’t like teaching poses I didn’t have Sanskrit names for, like Exalted Warrior and Three-Legged Dog. I didn’t like wondering if my students dug my Disco Yogi Fever playlist. I didn’t like trying to remember what the hell we did on the right side, or thinking to myself, “what pose should come next? What pose did we just do? How am I going to close this thing out?”

I had to let go. I wasn’t a good Vinyasa teacher, and I didn’t want to be one.

My mentors told me to teach what I know, so I cut everything but two all-levels Ashtanga classes from my schedule. They’re led, but not counted in Sanskrit. Depending on my student population, we work through the Primary Series up to Triang Mukha Eka Pada Paschimottanasana, maybe through the Janus, maybe all the way up to a half primary. It’s better. I don’t play music, I don’t have to concoct a sequence. Why would I want to? Sri K. Pattabhi Jois already created a perfectly good one that I love.

But back to my original point that led me to teach Vinyasa in the first place: I’m not experienced enough to teach Ashtanga, and if Ashtanga is what I know, maybe I shouldn’t  be teaching at all. Ashtanga is best learned in a Mysore program, not an introductory group class. I worry that I’m teaching a bastardized version of what Guruji would have wanted.

I’ve been practicing less than three years. I’ve heard other Ashtangis say that Ashtanga teachers should have a decade of practice under their belt before they call a class to Samasthiti. I’m nowhere near that. I just got the first pose of second series about a month ago. I’m a novice. What am I doing trying to lead other novices through an intricate system of breath, bandhas, and drishti? 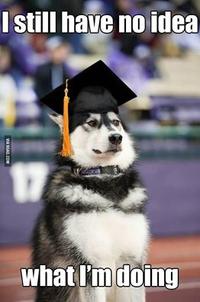 Maybe I should stop teaching until I have that decade. Maybe not. I don’t know the right answer.

I guess I should have titled this post, “So I thought I wanted to be a yoga teacher, but I secretly did, and now I know that I really didn’t and I’m confused.”

Teacher training cost me $3,000 and 200 hours of my time. When I get angry at myself for dropping that cash and time on a teaching certificate, only to consider never teaching yoga, I have to work hard to remind myself that it was worth it. Not financially. Hell no. Not even a little bit.

But it was worth it to learn that I know nothing. There’s real value in that. I’ve actually been happier since I acknowledged the fact that I may not know enough to teach this stuff. My practice has gotten stronger, and I’ve gotten more dedicated to the Ashtanga system. It must be because, according to Socrates, “the only true wisdom lies in knowing that you know nothing.”

If Socrates said it, it must be true.

10 thoughts on “So I Thought I Wanted to be a Yoga Teacher, Part 2”