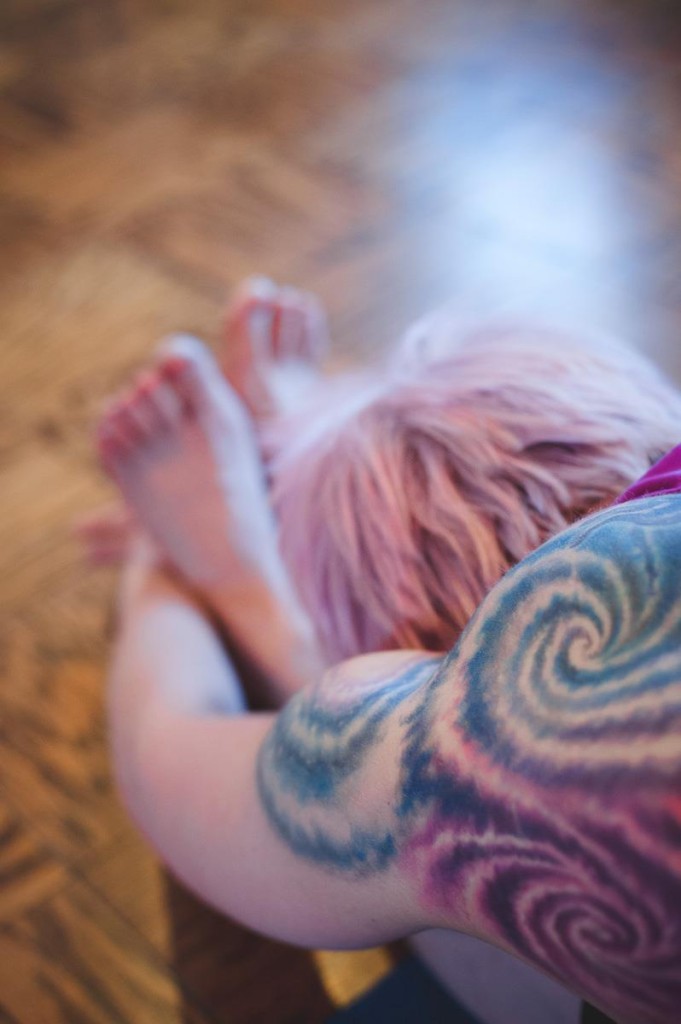 Lately, my mat has felt like a life raft. Not in a “yoga is saving my life” way. Not even in a “my practice is the only thing keeping me sane” way. It’s a life raft because I feel like I’ve been shipwrecked in the middle of the ocean, and if I don’t hang on to my raft, I’m going to drown.

Depression feels like roadkill looks. Unless I’m in the middle of one of my sobbing spells, I may look OK, but internally, I’m flat and messy as that poor squirrel I saw on my way to the grocery store this morning.

When my brain gets like this, my practice changes. Sometimes, it becomes the only bright spot in my days. I look forward to it, even if everything else sucks. My mat is a place of refuge. I may not know if I’ll make it through my day without snapping at my husband or crying because I got hummus on my shirt, but I know I can inhale, exhale, and take a goddamn vinyasa.

More commonly, practice becomes a chore when I’m depressed. It’s another dreaded task on in infinite list. When brushing my teeth feels like an impossible effort, spending ninety minutes jumping around, folding, and twisting seems laughable. Even on those days, I’m sometimes able to force my way through it all, and I usually feel better for it, even if my body is so knotted with emotion that I can barely touch my toes.

Somehow, Ashtanga does help. Working up a sweat means that exercise-induced endorphins release into my bloodstream, giving me a temporary mood boost. Breathing deeply soothes my nervous system. Backbends energize my emotions. The three closing lotuses give me a chance to consciously open a channel to God.

I know all this, but sometimes, I still can’t force myself to practice. Those are the worst. Not only do I feel so bleak inside that I’m praying I get T-boned by a semi on my way to work, but I can’t do the one thing that I know will make me feel better. It’s hard not to beat myself up.

“You really should have practiced. Why didn’t you practice? You’re so lazy. Practice would have made you feel better. Real Ashtangis practice every day. If you’d done backbends, you wouldn’t need that fourth cup of coffee. Sloth-ass. You’d better practice tomorrow.”

As you can imagine, that’s not helpful. I’m clinging to practice like a life raft, but I’m holding on so hard that I don’t notice my fingers poking holes in the rubber.

The trick is to find gentleness. To ease myself into practice the same way I’d coax an abandoned, flea-bitten kitten out from under a bush. One slow step at a time.

One morning, I came to samasthiti, did opening prayer, then lay down. The curse of home practice includes a bed in my practice space. I coached myself into a sun salutation (“C’mon Emma. Just do Surya A. You can do it. Just Surya A”), then lay down again, weeping. I did it again. And again. Finally, I completed five Surya Namaskar A’s and did the only thing I knew to do next: Surya B. I muddled through the rest of my practice that way. It wasn’t pretty, but I made it.

Another morning, I made it all the way to Supta K, then burst into big, gulpy tears. I sobbed so hard I couldn’t even do closing series. Other days, I couldn’t force myself past sun salutations or standing series. Or I’d practice in the afternoon or evening instead of the morning, because I could barely get out of bed in time for work.

I had to learn to be okay with that. Otherwise, what I was doing wasn’t yoga, it was self-flagellation. With barbed wire.

Ashtanga is good medicine for my depression, but when I turn it into a club and start beating myself, it turns into poison. I had to accept that any practice, even just a single Surya A, was better than nothing, and if nothing was all I could do, then that was okay too.

The best thing about having an Ashtanga practice as a life raft is that it’s always there for you again tomorrow.