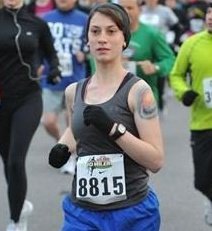 Running: the sport that brought me to yoga. Look how tiny my arms were from the lack of chatarungas!

I took my first yoga class in the basement studio of Virginia School of the Arts in 1999.  I was thirteen.  I remember being frustrated with my limited flexibility but loving the physical exertion and concentration it took to do things like try to bend my front leg to ninety degrees while I pressed my back foot into the ground in Virabhadrasana B, my skinny teenaged arms reaching to opposite walls of the room.  I understood why that pose was called Warrior.  When I took my gaze over the top of my fingertips and bent into the front leg just a little deeper, I felt like I could conquer a continent.

As much as I loved that initial class, it took fifteen years, a few Rodney Yee DVDs, and a hip surgery for me to develop a daily practice.  The surgery ended a brief but promising competitive distance running career.  While I rehabbed, I practiced occasionally to the various yoga videos I’d bought over the years, along with aerobic cross-training like cycling and swimming, but I felt like something was missing.  It was.  I didn’t know it at the time, but I was missing parampara—the direct teacher-to-student transmission that happens in traditional yoga instruction.

In December 2012, I bought an introductory package at Cityoga, a studio near my home in Indianapolis.  After trying a few different classes, I stumbled into Carol Tharp-Perrin’s Saturday morning Ashtanga Vinyasa and immediately felt at home.  There was no music, or suggestion to “set an intention.”  The series of postures in Ashtanga Vinyasa is memorized and practiced silently, the same set of postures every time.  And it’s hard.  Sweat-dripping, thigh-tremoring hard.  I remember watching people pop into headstands and drop into backbends like they did it every day (because they did).  Instead of parroting the movements of an instructor at the front of the room, these yogis knew the practice in their bones.

I walked out of class that morning feeling two inches taller.  Three weeks later, I was practicing Ashtanga six days a week at Cityoga.  Five of those practices started at 6:00 A.M.  I learned in the traditional method, a single pose at a time, under the instruction of a watchful teacher who gave verbal and physical adjustments until my postures were precise.  My shoulders, triceps, and latissimus dorsi started to look like they were carved out of oak.  My balance improved.  I could touch my toes without bending my knees.

Walking out of those early morning classes, I felt the same stirring of emotions that I used to experience after a two-hour trail run in perfect weather.  There was the elation of endorphins, the thrill of challenge, and something else.  It wasn’t the blissy peace that many yoga classes advertise.  It was a heightened awareness, an energetic sizzle that told me I had been in touch with something bigger than myself.  That sizzle kept me coming back for more, and it still does, day after day after day.

Ashtanga, you had me at Surya Namaskar A.